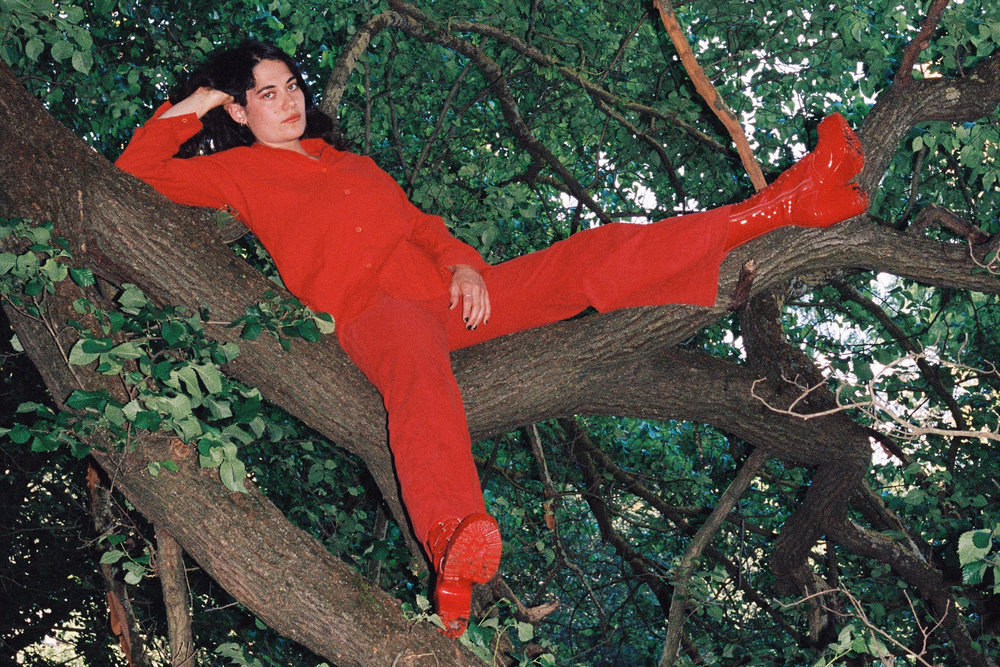 I love Gabriella Cohen! The two albums she has released are splendid and watching her live show is an absolute pleasure. She balances melancholy and cheek very well, and her songwriting has an incredibly sentimental feeling to it. I really respect her approach to the music industry too- she's a very prolific writer and her love of the craft of making a record is very inspiring. I know she's working on her third one now, I can't wait to hear it.

I'm so in awe of Spike Fuck. The Smackwave EP is so fully encompassing, so brutally honest and real. I first listened to it on vinyl when I was at a friend's place for dinner. I was so entranced listening that I could barely hold a conversation.

When I first heard Juice perform this song live I cried my eyes out. She released a stunning video and recording of this song earlier this year. It gives me shivers every time I listen to it, because I've been in the position she describes herself being in so many times. I have no doubt that a lot of people will also find this song extremely relatable.

Nina Simone is such a powerful performer. This is an interpretation of a poem, I listened to it for the first time recently late one night in my bedroom listening through archives of her performances. Nothing else accompanies her voice. There is no need for it. Her voice alone is incredibly moving.

Vashti Bunyan - If I were

The arrangement of this song is stunning- the strings are so beautiful. I like the short length of the song, it feels very considered and deliberate, and I can very much relate to this idea of miscommunication between two people who love each other. It's a fascination that many of us write about.

Kelsey Lu is absolutely one of my favourite artists. Her composition, performance, and visuals- it's so easy to become fully absorbed in the world she has created. I believe we were also raised in the same religion, which makes me feel quite connected. I've met quite a few people now who have had similar experiences and I find it really interesting to observe how this comes through their art. This song is a masterpiece. I love it.

Tom Iansek is one of the best musicians and producers ever. I was so incredibly lucky to have him produce my debut album. I really couldn't have wished for it to be any other way. His latest solo record "Golden Repair" was released last year and it gives me all of the feels. This song hits me right in the heart. I feel so much pain and loss and growth in the lyrics.

This is such a powerful song. The final lyric "And we're steady while holding you all" is huge. Laetitia Tamko has written, arranged and produced pretty much all of her own work. There's a great Song Exploder episode on another one of her songs, "Water Me Down", which is from the same album which I would very much recommend listening to 🙂

Haley's songwriting is so great. The lyric "Face me, face me entirely" is so strong. Her songs feel so personal. This recording makes me feel like I could be in the room with her. I would really love to see her live. She has another song where she sings about someone who believes that the  praying mantis in their bath tub is a priest from a past life out to get them and it is also very amazing.

Angie Mcmahon - If You Call

Angie is a wonderful human being, and her personality is so present in her songs. Her album 'Salt' got me through my last break-up.

The opening line to this song "I'm putting down the habit, the habit of looking back on all of it and wishing I had done better" really pulls me into the feeling of the song straight away. It's the final song on the album, after having experienced listening through the entire LP, to end on this song just feels so hopeful and full and rounded and complete.

I think it would be difficult to find someone who doesn't feel some kind of connection with her music. It's a gift to this world.